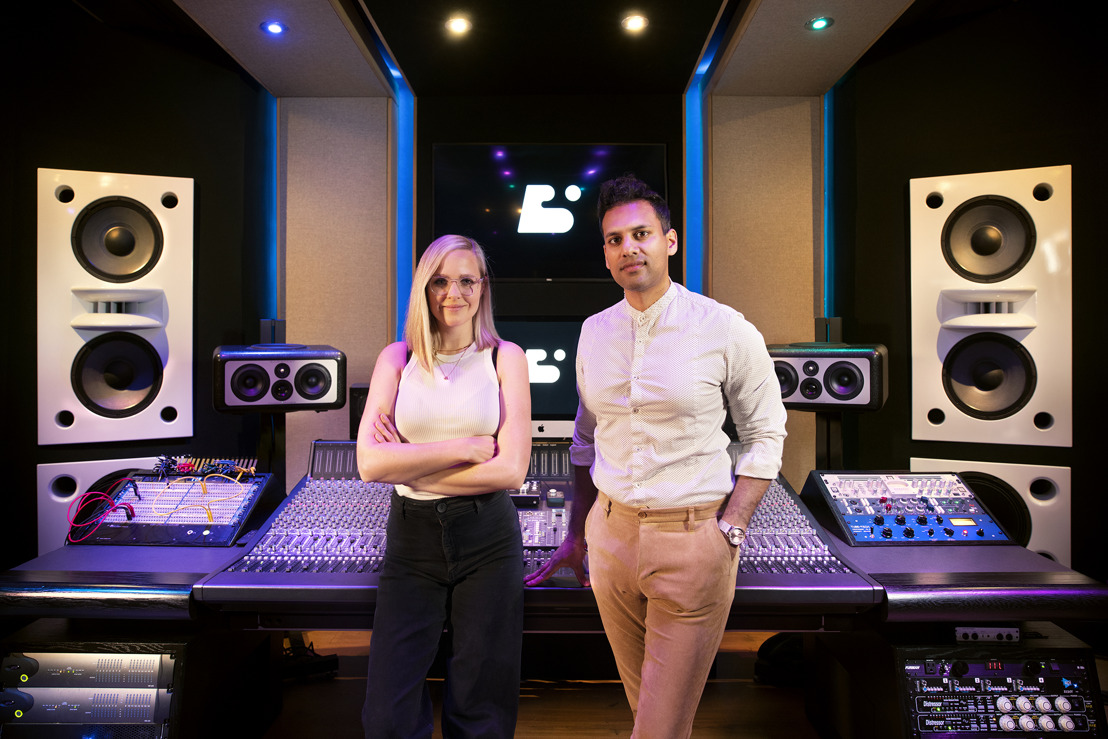 Atlanta, Georgia, March 10, 2022 – Established in 2014 by award-winning mix engineer Nick Chawala, Bravo Ocean Studios has quickly become a choice destination for artists looking for a unique and inspirational high-end recording studio in Atlanta. The studio recently added a sleek new mix room to its state-of-the-art facility with peerless acoustic design and studio monitors coordinated and manufactured by Symphonic Acoustics. The brand’s high-end monitoring prowess combined with NIRO™ analysis, have been setting the standard in several Atlanta-area recording studios in addition to many others around the world

Platinum award-winning mix engineer
​Chahwala started in the industry as a young musician nearly 15 years ago, looking for an affordable recording opportunity for his band. He landed an internship at a studio and as he secured a sponsorship with studio time and an engineer— the band dissolved. Within the 30 days of studio time he still had left, he taught himself and released an album that garnered a lot of recognition. His ambition matched with raw talent resulted in a job with the studio where he was invited to work with legends like Elton John, Outkast, and Whitney Houston, and later produced for Mariah Carey. In 2014 when his contracts expired with Capital and Epic, he had gained the experience and client relationships including a Grammy nomination for Katy Perry, and he felt it was the right time to build his own studio.

Rapid industry growth in Atlanta
​When he left the label circuit, it was a risky decision because at the time, the head of artist relations controlled a lot of the artists underneath them. It’s still somewhat that way, but Chahwala said what made the biggest impact is when streaming and new distribution channels started targeting independent artists. Then social media became their own distribution channels for a lot of artists. Combined with the thriving trap and hip-hop community and the growing presence of tv/film resulting from state incentives, the city has become the new “It” destination for the entertainment industry. Although it was a risk, Chahwala says he was able to predict the direction the industry was headed. As one of the youngest studio owners, he is still heavily involved with the new generation of artists and he saw how they take ownership of their art and turn it into a brand, where music meets lifestyle through content creation. When the film tax  incentives, infrastructure / housing market statistics all pointed to Atlanta, he knew it was the place to be. While other locations are closing down, Atlanta is building and growing.

Vision for Bravo Ocean
​Chahwala noticed early on in his career the substantial difference in treatment between label artists and indie artists so he wanted to change the perception of recording studios and the way they’re experienced. He realized the talent in the new or unknown creators was equivalent to some of the established artists and he aimed to fill the gap by granting them access to major label quality and resources such as engineers, consulting, coaching and other studio services. “My passion is helping the newly signed artists (or independent artists) and helping them get to their full potential.” Bravo didn’t follow the recipe of starting with the location, installing some speakers, throwing in some engineers and calling it a business. Quite the opposite, they started with a solid team of highly trained engineers that gained a reputation for excellence and as the business became increasingly successful, it was important to Chahwala to give back to his engineers. They built the engineers first, then the clientele, then the studio. “I asked what their needs were to achieve the next level in their careers and they listed specific monitors, sound boards, and the type of rooms required to take on this type of clientele. Custom Augspurger monitors were at the top of that list, so when we installed them, it was more than just some loud speakers…It’s the definition of where we are as a company and the skill level of our engineers.” stated the owner. “It’s less about the output of the speakers and more about understanding how to receive that output, and our engineers know how to do that.”

Bravo Ocean’s company culture is internal facing, and highly focused on thorough training and being the best engineers and producers possible. “We invest a lot into our engineers because they’re the key to keeping our clientele happy. Most of our engineers have been with us for 8 years, since before we even had a space. No one’s left, we’ve only grown. The same goes for producers, we’ve lost 2 but only because they moved states or changed careers.”

Aligning With Symphonic Acoustics
​To meet the needs of clientele for their content creation, Bravo just built the largest control room in Atlanta and subsequently needed the decibel level to fill the space. It was crucial to the producer to get true Augspurger-designed speakers, not simply a name attached to branding.  Symphonic Acoustics was able to build and install monitors to George's exact specifications.  Chahwala had this to say about his experience working with Symphonic Acoustics: “Even with Covid and difficulty getting parts, I was in constant communication with Symphonic Acoustics every step of the way. They knew what I wanted and how I wanted it. Not only them, but the team of companies they collaborate with were also an invaluable resource; REDIAcoustics evaluated my room to tell me exactly how the speakers would sound before I committed to installing them. Nobody else offers that service.”

PK Pandey, founder of Symphonic Acoustics, remarks, “The REDI acoustics NIRO optimization process gave us deep insight into the room and specified the custom acoustic treatments providing us with the most advanced technology available today.

Bravo Ocean is unlike anything else in Atlanta because design is an extremely important component and the studio owner was unwilling to compromise on sound nor style. Bravo Ocean was designed by Swedish born designer Ulrika Chahwala. Ulrika approached Bravo with a modern and Scandinavian inspired design with sleek clean lines. “We built, tore down and rebuilt until it felt and sounded right, and now everyone who steps inside is blown away by the space", says Nick.

Finding the fine line of an elevated look that attracts major film studios and actors, yet still appeals to the hottest trap artist was no easy task. It's not uncommon to see Jack Harlow in one room and Zoe Saldana or Kevin Bacon in another.  When Nick and Ulrika saw the configuration with the new Symphonic Acoustic speakers with the vertical integration, it fit perfectly with the design of the new room and everything aligned. Every square inch of the space is instagram ready which is such a huge part of today’s culture. The new room hasn’t opened yet, however it’s already completely booked out from companies like Amazon Music, Warner Bros, Netflix, Disney and TikTok. Clients are coming in to shoot just as much as they’re coming in to record in the space. Nick and Ulrika Chahwala travel the globe at least a few months out of the year and observe design - where it’s heading and how it brings people together.

“Atlanta is thriving and becoming much more diverse than it used to be. There’s a lot of tastemakers here and at Bravo we want to give people what they want before they even know they want it," said Nick. "Hospitality is another key factor at Bravo Ocean, everything you want or need we want to anticipate and be 5 steps ahead.”

About REDI Acoustics™
​REDI Acoustics™ is a company specializing in providing solutions for a range of Acoustical Research and Development Initiatives. REDIAcoustics has created NIRO™, a groundbreaking wave-based, computer-modeling software tool.